Automatic checkout startup Supersmart has raised a new financing round led by Millennium Food-Tech. The company, which provides retailers with an autonomous fast checkout ‘Scan & Go’ system, raised $10 million 11 months ago led by German manufacturer Bizerba with participation from other funds and private investors. Bizerba, a leading company in manufacturing slicing, logistical, weighing, and labeling systems for retail chains, is the largest shareholder in Supersmart. 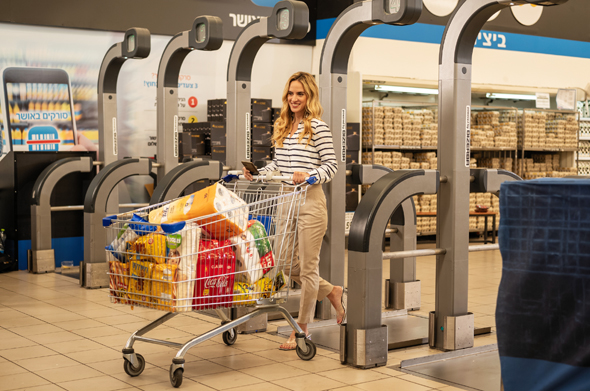 Supersmart in action. Photo: Courtesy
Millennium Food-Tech, which is an R&D partnership traded on the Tel Aviv Stock Exchange that specializes in investing in companies in the foodtech sector, will invest up to $5 million in the new round, which also includes participation from other funds and investors. As part of the SAFE investment agreement, Millennium Food-Tech, managed by CEO Chanan Schneider and Chairman Guy Rosen, will invest an amount of $3 million in the first stage. This is Millennium Food-Tech’s 10th investment since it held its IPO 18 months ago. Supersmart, which was founded in 2014, had raised about $10 million previously and has 40 employees in Israel. The company’s solution is fully deployed by many retailers around the world including Metro, Edeka, and Selgros, and installation has begun at leading retail chains in the United States. In Israel, Supersmart’s system operates in the branches of the Osher Ad supermarket chain, which is also an investor in the company.
Related articles:

“The belief shown in us by Millennium Food-Tech, as well as existing investors and the world’s leading marketing chains, establishes Supersmart as a leading solution, which upgrades the customer experience, in an easily applied way, and through which checkout lines will become a thing of the past,” said Supersmart CFO Ofer Ilan.