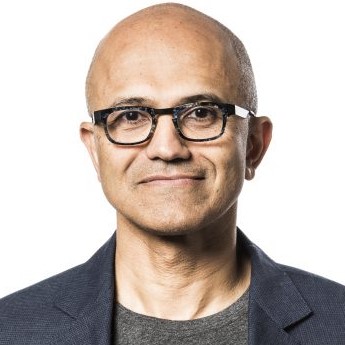 Joining Microsoft in 1992, he quickly became known as a leader who could span a breadth of technologies and businesses to transform some of Microsoft’s biggest product offerings.

Most recently, Nadella was executive vice president of Microsoft’s Cloud and Enterprise group. In this role he led the transformation to the cloud infrastructure and services business, which outperformed the market and took share from competition. Previously, Nadella led R&D for the Online Services Division and was vice president of the Microsoft Business Division. Before joining Microsoft, Nadella was a member of the technology staff at Sun Microsystems.

8:45 - 9:15 AM
Keynote Session
|
SAP QualtricsXM Theatre, Level 1
Opening keynote with Satya Nadella, CEO, Microsoft
Microsoft CEO Satya Nadella will deliver the opening keynote at NRF 2020. He will share his thoughts on the future of retail and how technology can help the industry transform. Microsoft works closely with retailers all over the world to help them... Read more
See All Speakers